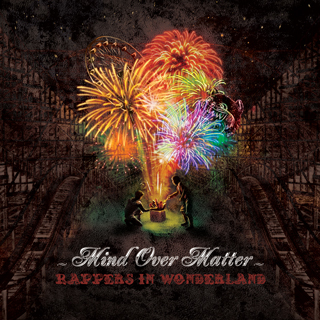 Following the release of their lead single Rappers In Wonderland, Mind Over Matter have been announced as this weeks Triple J Unearthed Feature Artist. Since release the single has already been added to spot rotation on Triple J as well as full rotation on Sydney’s FBi. Mind Over Matter will be setting off an east coast tour later this year.

Emerging from Sydney’s vibrant hip hop community in 2006, the duo known as Mind Over Matter quickly established themselves as artists to be reckoned with. Through their highly lauded mixtape For Our Hip Hoppers, they successfully built and earned a loyal fan base nationally. In 2008 Mind Over Matter released their Debut album entitled Keepin’ It Breezy to industry wide praise, culminating in a nomination for Australian album of the year in Triple J’s J Mag. With the success of this debut combined with their pre-established following cemented by back to back outstanding releases, emcees Willow and Smiles Again have toured the country extensively and have seen their following grow to heights that once didn’t seem possible.

After hitting sold out venues in a multitude of locations across the country Mind Over Matter have proved themselves to be one of the most highly charismatic, energetic, and creative live acts this country has to offer. To date the duo have played along side an incredible range of international acts including Jebediah, Masta Ace, Wordsworth, Planet Asia, DJ Crazy Caz (the late Tupac’s DJ), Mystro (UK) as well as Australian heavy weights Bliss n Eso (Mind Over Matter were selected as support for the trio on their National Get Loose tour and Flying Colours Tour), Muph n Plutonic, Pegz, Drapht, Downsyde, Pez & 360, Phrase & DJ Flagrant, Def Wish Cast and many more.

The dynamic Sydney duo have also performed at multiple festivals, both locally and interstate and have even hit stages internationally, travelling to Thailand as well as Osaka, Japan, performing some incredibly well received shows as well as filming a video for a collaboration track titled How We Get Down.  With the fantastic reception of their debut LP Keepin’ It Breezy, Mind Over Matter have been added to a multitude of radio play lists nationally, including Triple J, FBI and many more. Clipped Wings featuring Vast Aire, a stand out track from the album became the highly sought after single of the week on Sydney’s FBI 94.5FM, further validation of this crew’s talent and appeal.  Always staying focused and productive, M.O.M. featured on and hosted the Who’s Got Next Mixtape, a project showcasing some of Australia’s best up and coming talent and since then have completed their highly anticipated second mixtape, rightfully titled Free The Wolves.  In 2010 Mind Over Matter received huge recognition for their stand out feature verses on Bliss N Eso’s #1 Aria Charting album Running on Air.   As a result of the feature and surrounding buzz the group joined Bliss N Eso on all dates of their nationally sold out Down By The River tour.

Rappers In Wonderland is the first single from their much anticipated sophomore offering, Just Like Fireworks – scheduled for release early next year. Rappers In Wonderland features an energetic, guitar driven beat with punching percussion and 60’s surf undertones; produced by their DJ, DJ Ila and mixed by Matik (Pez/Seth Sentry) the track sees Willow and Smiles exchange trademark clever, tongue in cheek wordplay. The song is rounded out nicely by an infectious, chant style chorus and serves as a polished and impressive reintroduction to the group.