Subsketch is a Sydney based Hip Hop artist (MC & Producer), originally from the Adelaide foot hills. The Subsketch story dates back to 2002 and the short lived group Def Before Dishonour. DBD were a 3-piece consisting of DJ Mula, MC Trubador & a then 17 year old Subsketch. 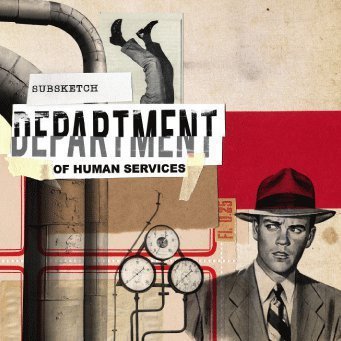 Arriving out of nowhere, performing alongside some of Adelaide’s best including Delta, Terra Firma, Hilltop Hoods, After Hours and more, DBD wrote and produced an entire album before throwing it away, breaking up and vanishing as quickly as they had appeared. Subsketch cautiously re-emerged as a solo artist in 2004 with an EP detailing those missing years, The Lost Demo. He followed it up in 2006 with The Spring Clean, as the name suggests this EP featured words and beats which had accumulated over the previous 4 years, even including some never before heard cuts from the lost DBD album. Then in late 06 Subsketch was introduced to a wider audience through winning the Hilltop Hoods Initiative, which in turn funded his debut album Cheaper Than Therapy. The subsequent Therapy tour saw him performing all over Australia alongside Thorts, Class A, DJ TR!P, K21, Koolta, Rapaport, Lotek and Apsci to name a few.

Being his second full length album, The newly completed Department Of Human Services was built on an ethos of lo-fi minimalist beats & outward looking lyrics. Recorded and co-produced by acclaimed film composer Mister Benjamin Speed, mastered by Neville Clark (Hilltop, Funkoars, Terra Firma) and featuring the distinctive artwork of Jordan Clarke; the Department is his most accomplished and cohesive work to date. It is available at www.subsketch.bandcamp.com in 2 options; as a free download, or for $20 (free shipping) you get the deluxe edition that includes

Subsketch is currently hiding out in the inner west of Sydney, he has several new projects on the boil, priorities include booking shows, hosting his fortnightly podcast at www.subsketch.blogspot.com and completing his collection of classic universal monster movies.