The wait is finally over with the arrival of Vents new album Marked For Death and fresh tour dates announced this week for SA and VIC – see details below:

An imposing live performer Vents has toured nationally with Funkoars, and most recently Hilltop Hoods. In 2007 Vents enjoyed a level of mainstream success with his debut album Hard To Kill. The track Love Song was picked up by Triple j and in the following years he toured extensively, playing festivals such as Big Day Out, Homebake, Summadayze, One Movement and Groove is in the Park. May 13th this year saw Vents release his sophomore album Marked For Death, once again enlisting Trials of the Funkoars to handle production duties. Trials has recently experienced a huge amount of success behind the boards – producing Drapht’s platinum single Rapunzel and working with Ash Grunwald, Hilltop Hoods, Abbe May as well as countless others. Gifted newcomer, ADFU comes on board to complete the team. Label mates Sesta & Hilltop Hoods add guest vocals to the album supplying another dimension to the project. Since releasing Hard To Kill in 2007, a loyal following has eagerly anticipated his next release. An extended hiatus hasn’t tarnished Vents’ standing with Hip Hop fans; in fact it’s fed the anticipation. Four years on, Marked For Death serves at the big brother to his debut release, with a more mature, introspective, sometimes cynical but always honest view of the world, that is both unique and entirely relatable.  The first single History Of The World has garnered airplay across the country with support on both independent radio and national broadcaster Triple j, heralding exciting times ahead for Vents in 2011. 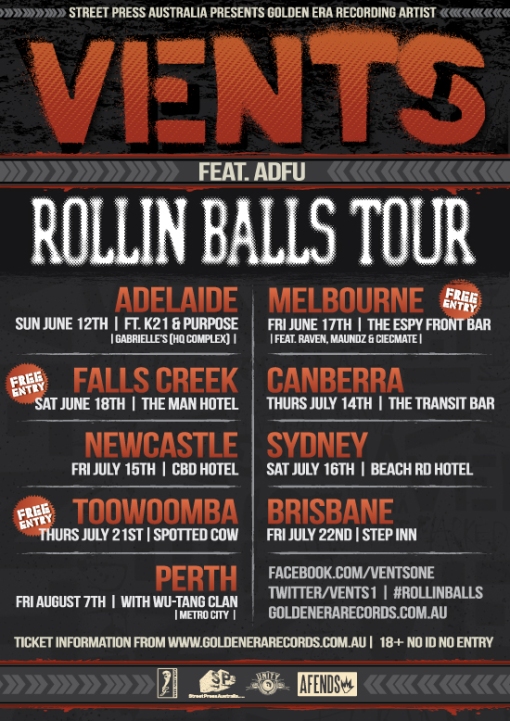