Mention Rainman amongst the initiated and the respect attributed to his name is palatable. Recognised nationally as one of Queensland’s finest, Rainman’s list of collaborations, support slots and guest appearances reads like a who’s who of local hip hop. 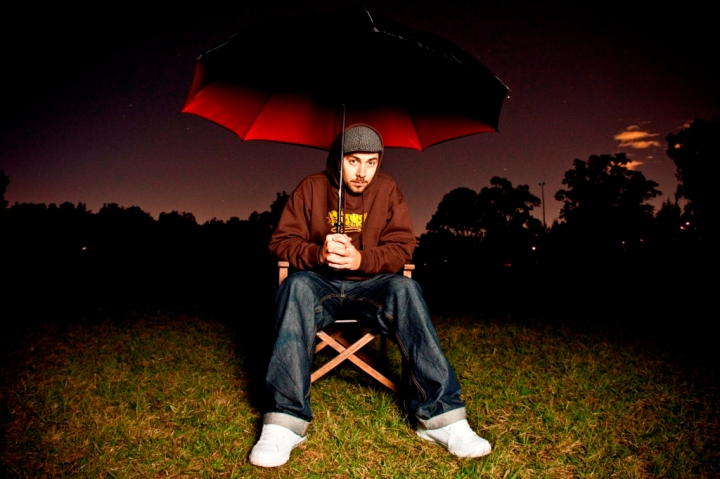 Rainman is poised to drop his second album Bigger Pictures, in stores Friday 4 May through Obese Distribution. The album sees Sammsonite return for the lion’s share of the production but also features some of Australia’s finest beat – smiths including the APRA and AIR Award winning, ARIA nominated Count Bounce, DJ Bonez, Mangohig (Sietta), Chasm, Cam Bluff and Calski. Guest MCs on the record include Muph, Tommy Illfigga, Yuin Huzami and many more, while Laneous (Laneous & The Family Yah) and Kel on Earth (Bankrupt Billionaires) lend soulful vocals across the album.

The first official single off Bigger Pictures is Darlin’. Featuring and produced by Calski, the track was available as a free download at the end of last year limited to one hundred fans only but will now be available on iTunes from Fri 23 March.

Rainman deliberately wanted Darlin’ to set the scene for the new album. In his own words: “Darlin’ is a love song. An ode to lady hip hop, a soul drenched Australian take on Common’s ‘I Used to Love H.E.R’ classic – with a twist. The initial demo of the beat from_Calski inspired me to flip the hip hop-as-lover idea from Common and put a fresh take on it. I didn’t want to just leave it at that though. I’ve been pretty interested in how passionate we all are about hip hop, those of us that grew up with it as kids, and how even for those of us as white kids from Australia, from all that distance away from hip hop’s origins, literally_and culturally, can still feel this whole-hearted connection and even a sense of ownership_of this music. I wanted to try get into the character of what hip hop – the lady – might have to say back to those of us that call her out. I figured she had to be a bit pissed off and wouldn’t be afraid to say it”.

It’s this lyric writing approach – taking songs to that next level of depth – that sets Rainman apart and sees him attract high praise from peers and fans alike. He paints bigger pictures. To launch Darlin’, Rainman will be touring nationally with Calski supporting Joelistics and Diafrix on the Running To Shine National Tour.