It’s the return of the chosen ones, Perth’s undisputed overlords of hardcore, Clandestien from the mighty Syllabolix Crew are back in effect. The trio of Tomahawk, Graphic, and Mortar have ventured out from the citadel to once again unleash their trademark darkness upon those who would claim king. 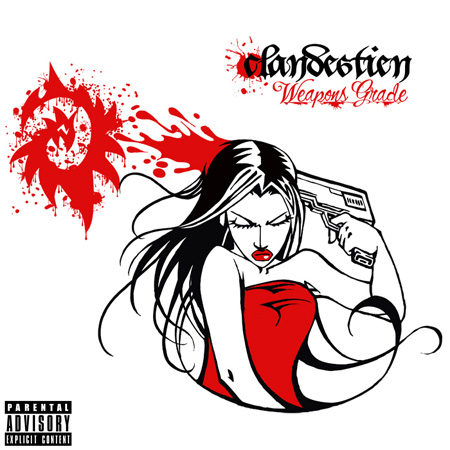 They’re back, and this time they’ve bought the whole armory. An armory full of weaponry in the form of hip hop at its most razor-sharp. Weapons Grade, the groups forth release, sees the cohort combine their venomous lyrical prowess teamed with a gang of the countries standout bomb manufacturers to conjure up eighteen tracks of raw firepower.
Clandestien again display a depth of skill which lies beyond the norm; alongside such esteemed marksmen as Brad Strut featured on ‘The Offensive‘, an onslaught of vicious spiticism. The Funkoars and Vents on ‘Daydream of a Killing‘, a foray into the twisted writings of rap’s most heinous. As well as Billy Bunks and Briggs on ‘The Joint‘. Other appearances also include Ciecmate, Maggot Mouf and Tornts, Defyre, FlashOne, K21, Motion, Evolve and the un-stoppable Adroit Effusive collective.
The album detonates with ‘Swan Song‘, a track that sees the Syllabolix squad, including the late great Hunter, breach all primary containment barriers and burn through the reactors core in a critical meltdown. Unlike the groups previous releases such as Dynasty (2004) and Chasms of the Citadel (2007), where production was handled predominately by Mortar. Here the sonic weaponry has been deployed by a variety of arms dealers.

Suffa of the Hilltop Hoods provides a guitar heavy stomper with ‘Relaxing in Blood‘. Trials kicks the system into def-con-1 mode with ‘Daydream of a Killing‘, and Tornts wires up the beat for shock and awe with ‘InTerrorGate‘. Conseps and Beats lay down heavy covering fire on ‘The Stampede‘ which sees the Clan, AE, Trials and Evolve absolutely smash through the speakers and run wild through the city streets taking no prisoners.
With uncompromising lyrics, sharp-witted word play, masterful bomb production, and their signature artwork, Clandestien have cemented themselves a cult-like following in the minds of many a hip-hop aficionado.  The timer has been set, and Weapons Grade is about to explode…