Slippery M.C hails from Sydneys South, fresh to the rap scene with his unique brand of Hip Hop, Slippery’s built a rep for a fun and entertaining live show! Already on his way to make a name for himself touring around Australia and in his home town Sydney, Slippery delivers a combination of clever, witty and skillfull word play with a rhyming style of his own. 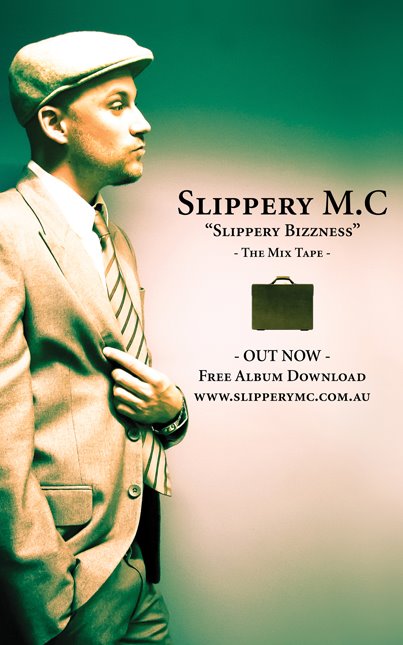 Hiding his rude subject matter with a smooth flow he twists catchy rhymes using crude and dirty words telling sometimes taboo stories of his own and friends fantasies. Busting on the scene in 2011 with only a demo CD to his name, Slippery was lucky enough to land the CD in the hands of the manager of huge international act Mickeys Avalon.

This earnt Slippery a slot as a support act on his Australian Tour. A few months later he was on tour again around Australia supporting another international act, rapper and actor Dirt Nasty. With already a string of gigs supporting big name artists like Mickey Avalon, Dirt Nasty, Kid Mac, Dutch, Concept & Miracle, Slippery’s year is looking busy.  Slippery’s been working hard in the studio to bring the much anticipated mixtape – Slippery Bizzness out now! A mixtape album launch and tour around Sydney will follow with dates to be announced soon.