Tennis Australia and Mushroom Events are delighted to announce the tournament’s biggest ever music-line up with more than two weeks of music at Australian Open 2018. Australian and International music superstars will headline on the AO Live Stage, located once again at the middle terrace of Birrarung Marr following a very successful debut series of shows last summer. 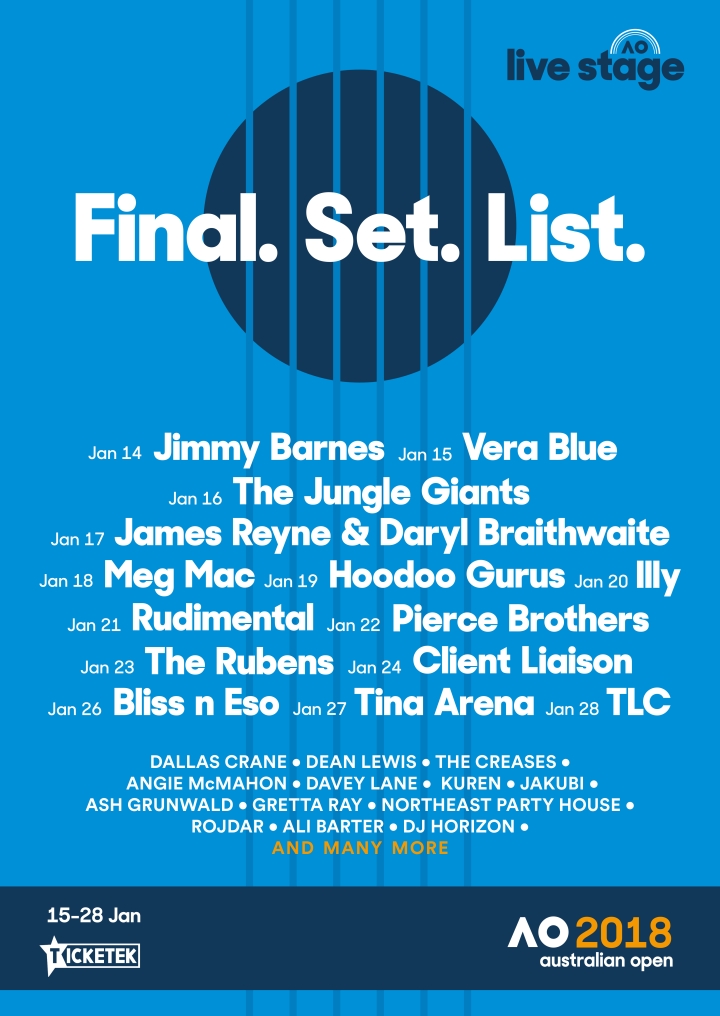 “I love summer in Melbourne and there’s such a vibe during the Australian Open. It’s fantastic to be a part of this great line-up of musicians and I’m really looking forward to playing an outdoor summer show in my hometown,” Tina Arena said.

On January 17 James Reyne will do a very special set, performing the hits of Aussie Crawl, the band he fronted which made him a household name.

“What a great line-up as a part of one of Melbourne’s most celebrated sporting events. We look forward to seeing everybody there and welcome the opportunity to share the stage with our great friend Daryl Braithwaite,” Reyne said.

The much anticipated Coopers Saturday will take place on Saturday January 20 with ARIA award-winner for Best Australian Live Act Illy headlining, with the support Kuren.

“In our second year as the official beer sponsor of the Australian Open we are thrilled to see the huge amount of Australian talent performing,” Cam Pearce, Coopers National Sales and Marketing Director said.

“We’re especially excited about Illy headlining Coopers Saturday fresh from his ‘Two Degrees’ national tour. He will certainly get the crowd going.”

Throughout the tournament access to the AO Live Stage will be open to anyone who has an Australian Open ground pass or stadium ticket. Mushroom Group Chairman Michael Gudinski said the huge music program featuring big names will once again make the Australian Open a special place to be in January:

“In the true tradition of Melbourne being the music capital, Tennis Australia continue to commit to the programming of great music,” Mr Gudinski said.

“The Australian Open is continuing to be the leader of the World Tennis Grand Slam and I am very proud to be part of it.”

Australian Open Tournament Director Craig Tiley said the AO Live Stage – and the big line up of stars – is part of the tournament’s commitment to making the experience for fans a rewarding one.

“Our focus and commitment to tennis fans coming to the tournament is to make the whole experience a real day out, something they will always remember,” he said.

“The AO Live Stage, and all the brilliant acts performing this year thanks to the careful programming by Mushroom Events, is an important part of this.

“After the success of this year’s series of concerts, we have expanded the lineup, it just gets bigger and better every year.”

Jimmy Barnes, who picked up Best Children’s Album at the ARIAs, and Dallas Crane will kick off the AO Live Stage with a very special event on Sunday 14 January, on the eve of the Australian Open, with the first ever FightMND charity concert to raise funds for Motor Neurone Disease (MND).

Sunday 28 January
TLC | Dj Horizon
All patrons under the age of 18 must be accompanied by a responsible adult.

Australian Open 2018, presented by Kia Motors in association with ANZ, Jacob’s Creek and Rolex, will take place at Melbourne Park from 15-28 January.