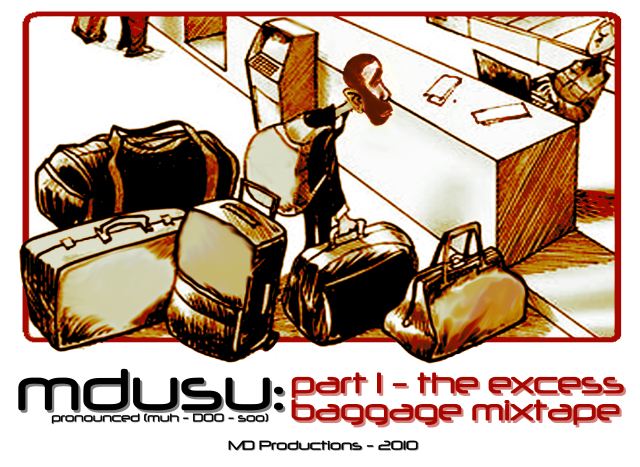 Hailing from Hobart – Australia’s southern-most capital city, mdusu (pronounced muh-DOO-soo) is one of Tasmania’s premier hip hop artists. Since his first live performance as an emcee in 2003, the MC/producer has built himself a reputation Australia-wide for quality recordings and raucous live shows, a feat which is all the more remarkable considering the isolation of his home town. In just a few short years, he has performed alongside acts such as De La Soul, Jurassic 5, Jungle Brothers, Z-Trip, Swollen Members, The Herd, Drapht, Funkoars, Muph & Plutonic etc. and can even lay claim to having shared a stage with Wolfmother (before the Grammy). Mdusu has also performed at every major music festival in Tasmania’s history (the Basin Concert, Gone South, the Southern Roots & Blues Festival, Soundscape & the Falls Festival), and has been a performer on over 10 albums as either a solo artist or band member since 1998.

As an emcee, mdusu earned his stripes through the freestyle & battle scenes, winning countless emcee battles across Tasmania, and performing solidly in battles across Melbourne. His lyrical skill has gained him respect amongst the leaders of the Australian hip hop scene, and has led to collaborations with many artists from around the world. mdusu is also an accomplished producer, having laced beats for almost every emcee in Tasmania during his 10 plus-years as a beatmaker. A skilled multi-instrumentalist, mdusu has spent more than half his life playing various instruments in live ensembles, and has toured Australia & around the Pacific Islands as far as Hawaii, playing many different styles of music.

In 2007, he produced two tracks for The Tongue’s debut, “Shock & Awe”, and supplied a verse to super-producer Chasm for his 2008 smash debut LP, “Beyond the Beat Tape”. The following year saw him drop verses on Dialectrix’s debut smash “Cycles of Survival”, and Astronomy Class’ second album “Pursuit of Happiness”, which was nominated for the “Best Urban/Hip Hop” Album of the 2009 ARIA awards. mdusu also produced a track for Obese Records’ signing Skryptcha on the DJ Flagrant-mixed mixtape “Who’s Got Next”.

In May 2008, mdusu and Tasmanian DJ Dameza released their groundbreaking sophomore LP, Can we get a soul clap? On May 10th (distributed by Obese Records). The album was picked up by Triple J, and helped mdusu&dameza become one of Triple J’s Next Crop artists for 2008, an honour which is only bestowed upon 30 artists of all genres across Australia. The album was also made the Triple J Hip Hop Show “Album of the Week” (June 9th-15th).

In February 2009, mdusu embarked on his biggest challenge to date, to raise money for victims of the Victorian Bushfire: A 12-hour non-stop Freestyle Marathon. Not only did he manage this incredible and never-before tried feat, he raised over $1300 in the process, and set an unofficial world record (longest continuous freestyle rap) in the process.

After relocating to the Gold Coast for family reasons in July 2009, mdusu released his solo debut, “The Excess Baggage Mixtape” (available below) – which has over 500 downloads in just two weeks, and is currently putting together his debut solo producer album, which features some Australia’s best emcee’s, singers & DJs.

My new album is going to be the first solo effort I’ve ever done – all my previous stuff has been group stuff, so I’m excited as to take the leap of faith by myself, and see what happens. I’ve been working on it for about a year and a half now, and I’m just up to the stage of getting verses back from people and mixing the whole thing. Not sure if I’m going to approach any labels about it yet, but ideally I’ll be able to work out a licensing deal for release. Guests include: Muph, Solo, Louis Logic, Dialectrix, Jeswon of Thundamentals, Ozi Batla, Skryptcha, BVA, Scott Burns, Roshambo, The Tongue, Patto, Haunts of Choose Mics, Homebrew (NZ), Thorts, Class A, Syntax, Prime, Purpose, & Rigby, so it’s a real collaborative effort. It’s gonna be called Ex-Samples, and I’ll be handling all the production, so it’s a pretty massive undertaking. 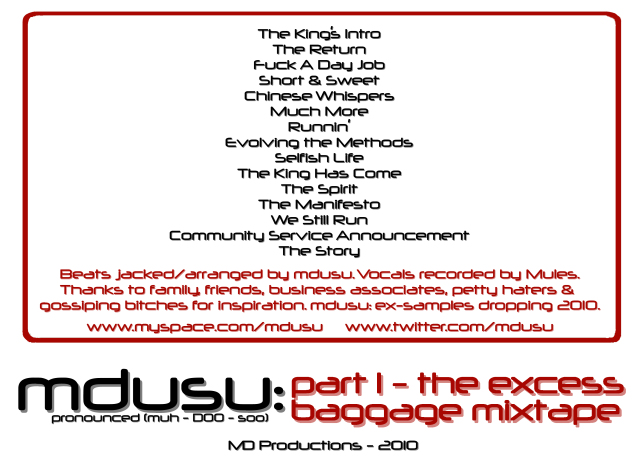