Fresh from touring across Australia with Horrorshow, New Zealand’s Home Brew will perform their own headline show in Sydney, at The Basement. Despite what people might tell you about Home Brew being burdens on society, or advocates for drug dependency, you’ve got to respect the integrity of their independence and the diligence of their work ethic. 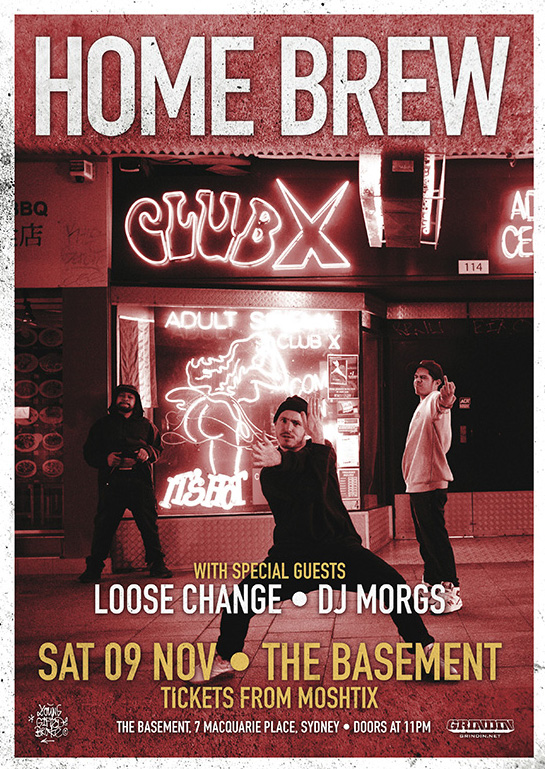 Home Brew launched their self-titled double album (the first Hip Hop album to debut at #1 in NZ since 2003) by throwing a 48-hour party in an old brothel, had their controversial Auckland pop-up store closed down early, and toured the carnage around NZ and Australia throughout July/August.

In the last year they’ve also gathered a strong online following from their popular online videos, been involved in three other 5 star releases (@Peace, Max Marx and Home Brew’s free EP ‘Last Week’), nominated for the Vodafone Critics Choice Award, the Silver Scroll Award and reshaped the rules of the NZ Music Industry.

After three years of dedication and benefit fraud, Home Brew’s Tom Scott (MC), Haz Beats (Producer) and Lui Silk (Hype Man) finally completed a piece of work good enough to move them out of their Mum’s place; a self-titled debut double album conceptualised by the balance of life’s extremities. One side, light. The other, dark. A dichotomy of methadone and melancholy. Infinity and finality. It’s a record that looks back at Saturday’s moment of madness through Sunday’s moment of clarity.

Featuring the talents of such people as Chip Mathews (Opensouls), Christoph El Truento (Wonderful Noise) and Hollie Smith (Don McGlashan’s friend) it’s their most mature, self reflective, existential piece of work to date.

Saturday November 9 @ The Basement
Doors at 11pm. Tickets via Moshtix.