By now, you may have heard of a little independent label based in Victoria doing BIG, BIG things. Little Wonder Productions is a hip hop, funk and soul label involved in the production, manufacture and distribution of its products on various audio formats. Headed up by Doc Felix, the label specialises in small run and limited edition music. Their latest project, an absolute ground shaker.

The beat scene in Australia has seen massive changes over the past decade. Artists such as Katalyst, Pasobionic, Hermitude, Plutonic Lab and more lead the way with their craft throughout the early to mid naughties. In recent years we’ve seen a massive cultural shift towards electronic beats in almost all genres. This includes everything that has a ‘drop’ to the Flume-ification of many Australian artists looking to capitalise on a popular sound. This change has been driven by both artists in the commercial lane and fans who don’t really know any better.

Many producers have left behind the nostalgic days of old, diggin’ through dusty crates of records in favour of quick digital solutions. We’ve always felt there was something special about digging and the relationship it developed with not only the artist but also the eventual listener. It meant at very least, that the beat maker was throughly involved in the process of their art. It was not unusual for artists to spend days, even weeks looking for that perfect break beat, tone, sample or vocal snippet. The public would only be treated to the final masterpiece after much scrutiny had been placed on every component of the beat.

We now see beats for sale as pre-packaged releases, to sell to what we can only describe as ‘lazy artists’. There are obviously a million excuses in favour of the need to use theses type of pre-packaged beat packs, but we can’t really buy into any of them. Hip Hop has always provided an avenue for any artist, on any budget to speak to the world, why would you want to use someone else’s voice?

Over the past few years, we’ve seen a steady resurgence in the beat scene here in Australia and we’re not talking electronic inspired beats. Although to be fair, there are a few exceptions here. Jaytee Hazard best know for his work with numerous rap artists here in Australia, as both a producer and DJ has slowly developed a following as a solo artist. Hermitude who have also been longtime collaborators with many in the hip hop scene, including a host of those from their Elefant Traks label have also continued to dominate the local scene. Beatmakers such as Akouo, the Uncomfortable Beats collective and Ta-Ku skirt with hip hop influences and elements. Even Flume’s much hyped mixtape release featured a host of international hip hop artists.

This resurgence has come at a crucial time. Vinyl is once again falling back into favour here in Australia, with the ever growing list of releases and supporting events such as Record Store Day. There are a select few who do vinyl well, and included in that small bunch are those at Little Wonder Productions. With seven release’s under their belt, it appears to be smooth sailing over at LWP. Release’s such as I Don’t Play feat. Muph, The Right Direction feat. Dialect and Plutonic Lab’s Submariner have all appeared on various vinyl formats. 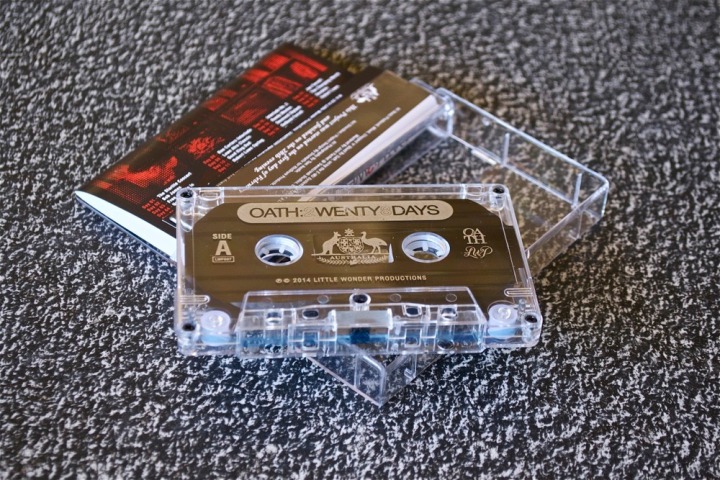 In June 2013 Perth native & now Melbourne resident Oath, released his first piece of work on the LWP label. Titled A Prelude To A Sunset, the album was available digitally, and also as a limited edition 12” vinyl piece. This 7 track album sold out almost instantly, leaving fans hungry for more.

This brings us to February 2015, and Oath has just dropped that follow up. 2wenty8days begun on the first and was completed on the last day of February 2014. With 28 beats and over 1 hour of music in total. This must have been a massive mission for Oath. Our first thoughts upon hearing about this release, were to be honest, highly sceptical. 28 beats in 28 days… surely most of these were going to be 30 seconds in length or just plain boring. Boy, were we wrong!

Oath’s 2wenty8days is everything we loved about those early hip hop beat tapes. Funky, groovy, head nodding, chill beats where you can either vibe out to and relax, or get shit done with a dope soundtrack backing. These beats are made to be enjoyed, listened to and woven into every aspect of your daily music listening pleasures. Each beat has that feeling of scrutiny, love and care shown by the artist. Oath was clearly immersed in this project for the complete month of February. The album has been released as a CD, and Cassette with a free digital version with any purchase. This further highlights the understanding LWP has of it’s artists and the clear vision of at which they produce their products. This release wouldn’t make sense on vinyl, why would it? This album needs to be played regularly and easily.

This is a clear statement from Oath, beats are what you make them. Don’t follow trends, carve your own lane. Stand outs on the release include the opening track The Cortenc Etirlast, The San Oscfancri Oncrect, Eobnsn & Rfalrel, Onsg Of Hte Wind, The Olden Gapple and more. Oath’s 2wenty8days is available now by following the links below. Don’t let this one slip through.

Both Doc Felix and Oath will be appearing on an upcoming episode of #aahhRadio Podcast. Be sure to keep an eye out for that one.