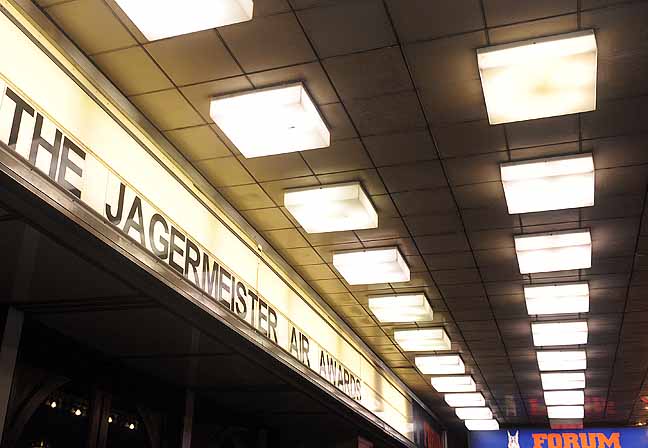 Proudly presented by Channel [V], NOVA, and MySpace, the fifth Annual Jagermeister Independent Music Awards (formally known as the Jagermeister AIR Awards) will be held on Friday October 1st at The Forum Theatre in Melbourne.

The event is a rare opportunity to join great Australian Musicians and the Industry at large, as they celebrate success with the Award winners, and enjoy performances by some of the country’s most sought after artists.
The Jagermeister Independent Music Awards  are Australia’s only official independent music awards, rewarding the country’s highest achieving independent artists across all genres, in any given year.
The evening will feature performances from those purveyors of punk, hardcore rockers The Amity Affliction; new indie darlings and vintage-alt-pop stars Cloud Control; virtuosic jazz pianist Joe Chindamo; indie wunderkids and brit-rock exponents British India; the intoxicating world-renowned singer-songwriter Sally Seltmann; and a hip-hop extravaganza from M-Phazes with Illy, Muph & Candice Monique, Solo and Mantra which promises some electric on-stage collaborations.

Awards to be presented during the evening include Best Independent Dance / Electronic Release, Best Independent Artist, Best Independent Hip Hop/Urban Release and Best Independent Hard Rock/Punk Release among others, with a number of high profile special guest presenters on hand to help with proceedings.
Now in their fifth year, The Jagermeister Independent Music Awards  continue to grow and are now recognised as a barometer for future ‘big’ acts.  Previous winners include Geoffrey Gurrumul Yunupingu, The Hilltop Hoods, The Herd, Eddy Current Suppression Ring, Gotye, British India, Sneaky Sound System and John Butler, many of whom have gone on to major commercial and critical success subsequently.

Given the depth of such Label and Artist success, Independent Music can no longer be viewed as just small or emerging. Independent labels are currently estimated to have 80% of titles on shelves and online, and continue to have the biggest winning scorecard every year from the ARIA awards to triple j’s Hottest 100, while also providing the bulk of talent to the Australian festival circuit each year.

Curated and created by the Australian Independent Record Label Association (AIR), this year’s Jagermeister Independent Music Awards  will be the jewel in the crown of ‘Melbourne Music’, a 10-day music festival programme presented by The City of Melbourne. AIR is a (non-profit, non-government) national trade association promoting and representing the interests and development of Australian independent artists, labels and music companies in Australia and throughout the world.

Best independent single or EP:
Bliss N Eso – Down By The River (Illusive)
To win a double pass to the gig change your status on Facebook to: “I want to go to the Jagermeister Independent Music Awards” and tag AIR | Australian Independent Records. You could rub shoulders with industry and catch an awesome lineup including British India, Cloud Control, Amity Affliction and M-Phazes.

This is a quick look behind the scenes with one of Australia’s biggest hip-hop producers M-Phazes at a rehearsal with Muph, Mantra, Candice, and the D²Drumline for the upcoming AIR Awards at the Forum un Melbourne on October 1st.