Grassroots Anarchy is emcee Requiem’s debut album. It has been described as a brazen revolt against this harsh new environment and an industry that has shunned him; a  molotov cocktail of beats and rhymes, a proverbial middle finger to nay-sayers and corporate giants alike. 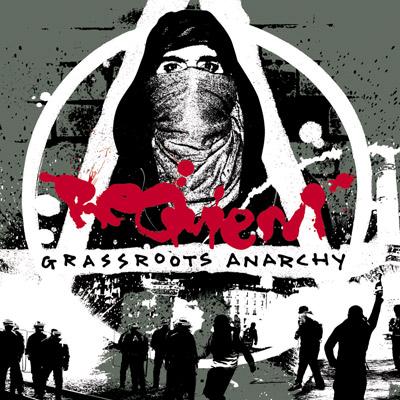 Requiem has a sociopolitical style littered with urgency and paranoia. Requiem has  created ten ‘recipies’ in his anarchist’s cookbook. Released September this year through Minimal Aesthetics, Grassroots Anarchy shuns the hype, taking up the arms of street journalism. Production on the album features Ciecmate, Doc Felix, Defiant, Pabstrakt and Wizard (UK). The album also features a modest guest list including Tahireh Thampi, Fluent Form and Maundz with cuts from No Name Nath. Grassroots Anarchy features 10 tracks, and comes with a cool booklet designed by Mexi for Ninety Calibre, logo design by Baddums. From the cover artwork you can clearly gain an indication of the type of style Requiem’s dropping. The booklet has the usual track info and credits, but also has a paragraph or so written by Requiem, on the thoughts behind each track. We think this was a great addition.

Apeshit the lead single, is a track most can relate to “working for a wage I go apeshit…..not having a fair say I go apeshit”. For a relatively young emcee, Requiem deals with some heavy issues and uses some clever rhymes to make his point. Apeshit is a rant about everything that pisses Requiem off about the industry and related social politics. Defiants production work on this track carries a beat with some dark overtones that will get your head nodding straight up. The next track that caught our attention was Counter Culture. This attack on all the kids who have jumped on the hip hop band wagon, claiming that they were there back in the day, hit homes. Requiem shines on this track, bringing that early aussie sound – which fits in well with the concept of the track. Wizard from the UK, produced a gem here.

Requiem explains his obsession with cinema and flexs some knowledge on this subject on the track Cinephile Confessions. Pabstrakt produces this track, bringing some unique flavor.  Track 9, Street Journalists features Fluent Form and Maundz, with Ciecmate on the beat. The sinister shit is surely brought on this track, No Name Nath cuts up with great touch. Verses from Fluent Form and Maundz are both violently vocal and pleasing, the guys combine with Requiem to bring an explosive track that tops off this solid debut album.

As the theme suggests, this isn’t just music, this is a protest. Requiem truly stands up for his beliefs in this album and does it with control and style, he seems to avoid a tongue-in-cheek style for straight up smash you in the face hip hop. Grassroots Anarchy is an honest offering and a solid effort from this young independent artist. Requiem shows signs of an emcee that will truly grow into his own over the next few years.

All in all – We we’re pleasantly surprised at the depth of this album and think Requiem has got a lot to offer. Some of the production wasn’t as good as it was in other areas, but that being said, Requiem’s raw style covers it well. Counter Culture is one of our fav tracks off the album along with Apeshit, The Violence Of Love and Street Journalists sneaking in for mention. For a debut album we’d say grab it for a listen, if you dig the harder style aussie hip hop, but like a bit of knowledge dropped at the same time, this is for you. We rate Requiem – Grassroots Anarchy 3.7 out of 5.

Requiem was nice enough to answer a quick few questions we threw his way.

Grassroots Anarchy is your debut album and you seem to be dealing with some heavy issues on the album, what was the overall motivation behind this release?
The overall motivation is just a revolt against everyone playing it safe. This is me dropping a bomb on a scene where not enough people are asking questions in their music. Everyone wants to be a radio hit and no one wants to talk about real issues. This is my protest against that trend.

We a see a lot of problems around the world at the moment, famine, economic issues and also a big one at the moment climate change, do you think it’s important to have a loud voice on these issues?
Yeah, it’s important to speak out about what you believe in. Not just the generic ones though, the topics everyone is speaking about – there needs to be more discussion on stuff people don’t talk about like the world bank and NWO. I’m just scratching the surface on this album.

What’s one ‘issue’ that really gets your blood boiling with-in Australia at this present time?
Just one? Haha. Maybe the lack of support for real music. I hate to sound cliché but it just seems if you don’t have nice happy sound you won’t get media attention, radio play or many gigs. Artists who are on that ’80s/’90s tip or artists making music with a message have a much a harder hustle to get their music heard.

You flex quite a bit of knowledge on the cinematography front in the song Cinephile Confessions, tell us about this passion? Do you have any recommendations for movies we must see?
I love cinema. I’ve grown up with movies. If I could be anything else than a musician it’d be a director. Don’t have the technical knowledge though… here’s my top five movies to watch:
1. American Beauty
2. City of God
3. Taxi Driver
4. Apocalpyse Now
5. Pulp Fiction

You can grab a copy of Grassroots Anarchy from Requiems website here. You can also catch the man on twitter here.